To view this blog at my blog’s website where you can sign up to be notified and read other posts relevant to prostate cancer, click here.

Much of the news this week in prostate cancer will be generated by the annual ASCO Meeting in Chicago where VP Joe Biden will be speaking tomorrow about the moon shot. It will be hard to miss the excitement – perhaps even eclipsing (for a day or so) the ongoing circus that is our presidential politics at the moment.

In prostate cancer, there are likely to be considerable news releases regarding precision medicine, and especially AR-V7, so I thought I would explain this a bit. Precision medicine is the broad terminology that (in oncology) refers to looking at the individual patient’s tumor genetic profile. In the broadest sense, it can also refer to all of our genetic makeup that can influence, for example, how we metabolize drugs. The optimal dose for you might be different from that for me based on our inheritance of slightly different enzymes that are involved in breaking down a certain drug. In oncology, it is now possible to perform whole exome sequencing (WES) on circulating tumor cells that give a nearly complete picture of an individual’s cancer – what is driving it, and what it might be susceptible to. In metastatic prostate cancer, as you know from my previous post, the tumor cells circulating in the blood stream could be coming from a variety of places, and likely each individual cell might have slightly different genetics – creating a considerable challenge in the long run for picking out “the” drug that is best for that patient, even with this high-tech approach. Nevertheless, WES has already demonstrated exceptional ability to find targetable mutations in cancer cells, often with several different pathways of potential susceptibility in each patient. Two challenges arise: 1) the drugs that target each “driver pathway” are often frightfully expensive, and 2) which one or ones would be the best to target?

So what about AR-V7? 14 of the 214 prostate cancer abstracts (keep that in mind when you ask your doctor, “Hey doc, is there anything new out there?”) deal with this biomarker. AR-V7 stands for Androgen Receptor – Splice Varient 7. I know…”too complicated for me to understand”. Think of it this way: The AR is the energizer bunny, and testosterone is the battery. Put the battery in the bunny, and he hops into the nucleus of the cancer cell and turns on all sorts of genes (including psa) that drive the cancer cell to do bad things (divide, invade surrounding tissue, metastasize, etc.). Now suppose the bunny becomes autonomous – no need for a battery – he can hop in and do his thing whether or not testosterone is present. This means that all of the new treatments that target testosterone (abiraterone/Zytiga™, enzalutamide/Xtandi™, etc.) really won’t do much. We call this resistance. Castrate resistant prostate cancer (CRPC) used to mean “simply” tumor progressing in spite of very low levels of testosterone (achieved with drugs like leuprolide/Lupron™, goserelin/Zoladex™, etc) or T-blockers like bicalutamide/Casodex™. What we now know is that patients whose cancers are expressing the AR-V7 form of the AR will not respond well to any of these drugs. This means that it could make more sense to proceed directly to treating with chemotherapy with a drug like docetaxel/Taxotere™. Dr. Scher and colleagues at MSKI report in this weeks JAMA Oncology and at the ASCO meeting on the utility of looking for AR-V7 in circulating tumor cells to guide therapy. 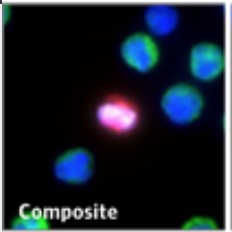 Using special immunofluorescent stains, they can identify the “bunny” (shown in white on this photograph from their publication) in the nucleus of some cells in some patients, and these patients are better treated with chemotherapy than with approaches targeting the AR. The implications of this are that we may be able to use such tests to avoid the expense and wasted time of trying to use AR directed therapies in some patients. As often happens, the science is far ahead of the insurance companies however. The Hopkins group have commercialized the test and in an abstract show that it can be cost effective in populations of patients where AR-V7 is likely to be >5% prevalent. Better yet, these insights are now in clinical trial to hopefully develop new treatments for these patients such as galeterone, which may be able to degrade (“kill”) the bunny as described in this abstract from the ASCO meeting.

So YES, we are making progress, and there is a LOT that is new “out there”. Scan the abstracts for yourself – it really isn’t that hard – and kudos to the prostate cancer researchers who are moving this fight forward so quickly.

4 responses to “Precision medicine and AR-V7”