To read this blog, any of my others, and/or sign up to be notified of future posts, click here.

I have had two life changing experiences in focusing. The first was when my wife discovered the Myers-Briggs personality classification system and found I am a “strong P”. This meant I couldn’t help it when I was on my way to take out the garbage, noticed a light had burned out, put the garbage down and went to get a light bulb, but found that there was a spot on the carpet that needed cleaning and finally found the carpet cleaner but an hour later wondered why there was a garbage sack in the hall. Prior to her discovery, she just thought I was an idiot, but she became [somewhat] more tolerant of the foibles when she could “classify” me. The second was when I had my congenital cataracts removed and new lenses inserted in my eyes. It was a whole new world of color. I had been living in a fish tank with scum on the glass and “wow, the world is really pretty!” was my response when I took the patches off the next morning. “Trees have LEAVES!”

Focus in understanding prostate cancer is becoming clearer as well. For several decades we have known that the Gleason scoring system is pretty darn good at predicting the cancer’s behavior, adding a lot to what we knew when there was only the digital rectal exam… “Oh, oh, that feels like a really big tumor” or “Maybe I’m feeling something but I can’t be sure”.  Then came the number of biopsies positive, the percentage of each core, differentiating 3+4 vs 4+3, and now an avalanche of new molecular markers, briefly reviewed here. Combining the old standby risk categories with the newer methodologies has been challenging.

A recent paper in the JCO provides us with one way of integrating the old risk categories with the newer molecular classifications. Using the widely adopted risk categories of the NCCN, the authors added to this, one of the more mature molecular classifiers, the 22 gene Decipher™ scoring system to reclassify (focus) a new model to predict outcomes. As I explained previously, these genetic tests are typically developed looking at the level of gene expression in biopsies or in removed prostates in a group of patients for whom an outcome is known (examples include prostate cancer free survival at 10 years or freedom from metastases at 5 years). The investigators (or companies) then go to a different institution or collection of biopsy material and see if their gene expression model developed from the first group accurately predicts the outcome in the second group. This is called “validation” of the test. Decipher has done all of this. The question is how it might change the risk classification of the “old” system.

This figure illustrates how it plays out when a large number of institutions collaborate to study the information gained and develop a new model. 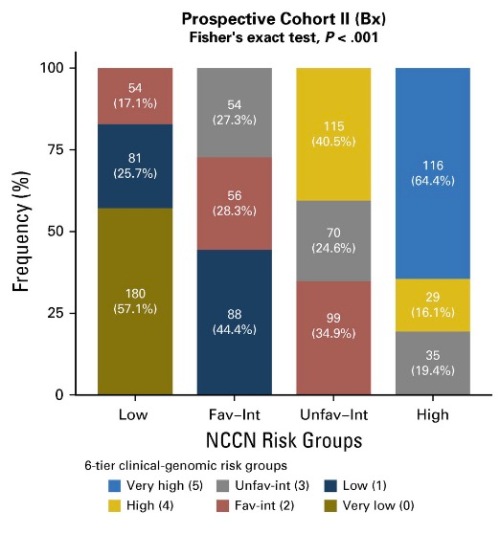 As an example of how this can be used in the “real life” clinic, we are often faced with a patient who has a “favorable intermediate” prostate cancer. Let’s say this is a 75 year old man with excellent health. Should we advise that he adopt a “watchful waiting” strategy, given his age and the relatively low risk? By adding the genomic test, you can see that 27% of the time, this might be a bad recommendation. Similarly, in the unfavorable intermediate group, 40% of patients are moved into a high risk category. Such a patient might be well advised to “do more” (example: more prolonged ADT with radiation, or use of brachytherapy in addition to external beam radiation if they had chosen radiation therapy as their preferred treatment modality).

These kinds of improved focus will allow investigators to do better studies prospectively as well. In breast cancer it is already a standard of care to do molecular classification of certain stages and types of tumors, allowing women to make far better decisions on whether (for example) to take chemotherapy in addition to surgery/radiation. In prostate cancer, where I have been concerned that we aren’t “racing for the cure“, rather we are “crawling for the cure”, it looks like we may be catching up. Research is the answer – sign up and contribute!