Yay – Voting is over and it’s Movember y’all


Every year, in honor of the guys I care for and the progress Movember has made in supporting research for prostate cancer, I join in the effort to raise funds from my faithful readers. This year is no exception. 2020 has been such a downer, we all need to do something positive to make ourselves feel better. So, if you can spare some change, I humbly ask you to support my annual scraggly moustache, and I can assure you the funds are well spent. For example, new tests are coming out of labs Movember supports. They constantly update the priorities as you can see in this article, and support ongoing clinical trials like this one. And for men isolated in our COVID times, there is the kind of support you need when facing tough questions at “Men Like Me“. In short, I hope you will help me with a donation to my Movember effort by clicking here:

For donors of >$50, I have ordered some Movember Moustache masks and will send you one. And for all participants, let’s plan on a zoom celebration in December – maybe I can answer questions sent in on chat or similar. If you are more savvy than me, scan the following image on your smart phone to be taken to my Movember webpage. And THANKS for your consideration and help!!!

The Hits Just Keep on Coming

To view this on my blog site and sign up to receive notifications of future posts, please click here.

I have a hiking companion who loves math, computers, and to a large extent, eugenics. He posits that we will eventually understand the human genome so well that we will be able to make all humans “smart” or “better” through genetic engineering. I argue back endlessly, with little success, that his definition of “smart” and “better” may not be shared  by everyone (he counters that these definitions will be left to the parents…) and that there will be unintended consequences of diving into our DNA with CRISPR/Cas9 technology.

The wonderful complexity of humankind is, of course, reflected in every single cell in our bodies and in all of our cancer cells as well. The debate over the number of synapses (or permutations) in our brains versus atoms (or stars etc.) in the observable universe is well beyond my comprehension. Unfortunately the “much simpler” question of how many things go wrong in cancer cells is also mind boggling. Hence, the phenomenal work of one of the West Coast Dream Team’s recent publications is not surprising. A reductionist view is shown in this diagram from their paper published last month: 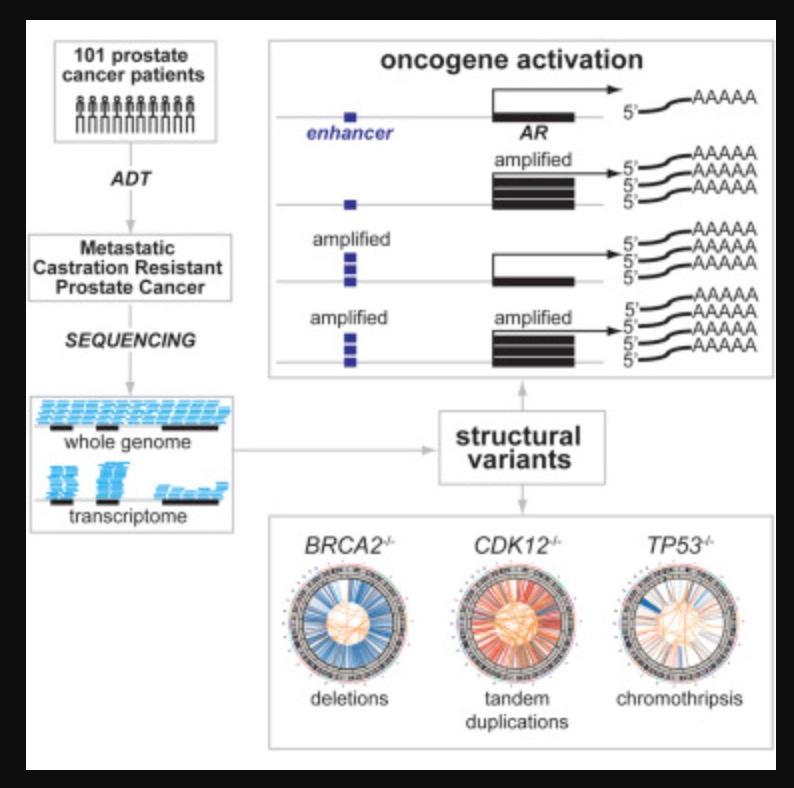 The scientific team, using funds from PCF, SU2C, and Movember (among others), did a whole genome analysis of metastatic tumor specimens from 101 men with castration resistant (hormone insensitive) prostate cancer. There is an excellent report on this work from the UCSF News Center here. Lest you believe that the results have resulted in an “aha moment” that will lead to “A prostate cancer cure”, you might do as I had to do and Google the word I had not heard of in the above figure, “chromothripsis“. Rather, the research leads to some very important insights that will doubtless contribute towards more effective therapy for 1000’s of patients eventually. By looking at the structural variants in the DNA that occurs outside of expressed genes, a much more complex picture of what drives castration resistant prostate cancer (CRPC) becomes evident. For example the androgen receptor (AR) is over-expressed in the majority of metastases and this study found a region of the “junk DNA” (non-coding for genes) that lies 66.94 million base pairs upstream of the AR that was amplified in 81% of the cases. This was 11% more common than the amplification of AR itself – an indication of how important the DNA controlling a gene like AR is, compared to the gene itself. So much for calling the DNA that doesn’t code for a protein “junk”!

A second example is the insight into patients who have alterations in a gene called CDK12 that may render them more sensitive to one of the “hottest” areas of cancer research, the use of checkpoint inhibitors of the PD-1 pathway I described in my last post.  This abnormality results in the cancer cells having an increased number of “neoantigens” (targets) for the immune system to attack as shown in this illustration from another recent exceptional paper.

The ongoing research from the many scientific teams focused on prostate cancer is awe-inspiring when you consider the complexities involved in the two figures in this post alone. Even getting a complete picture from a single patient is impossible, given the genetic instability and the variable mutations found in different metastases. Remember, this team looked at the DNA from only one (or a few) of the many metastatic sites found in each patient. Other studies have shown lots of different mutations depending on which site is evaluated as I reviewed here.  In spite of all of this complexity, the ability to at least begin to understand what is going on “underneath the hood” is the way forward, and just as we can recognize Fords vs Chevys vs Toyotas, “brands” that emerge from such studies will lead to treatments that are more appropriate for certain classes of patients. As we have known for a very long time, the most common feature is the “gasoline” of testosterone, and how it fuels the amplified AR has remained an effective target for the newer drugs like abiraterone, enzalutamide, and apalutamide. Perhaps studies such as this one will lead to a way of kinking the hose upstream of the gasoline nozzle, or throwing sand (immunotherapy) into the engine itself. But… to admit that we will never understand it all (or design the “perfect human”) still seems an appropriate expression of humility to me.

Hi friends and relatives (those who will admit it…),

This Movember, I’ve committed my upper lip to help change the face of men’s health by growing a moustache, now I need your support at http://mobro.co/michaelglode.The Movember Foundation is the leading global organization committed to changing the face of men’s health. I’m passionate about this cause because too many men are dying unnecessarily from prostate cancer. In 2014, more than 233,000 men will be diagnosed with prostate cancer. Even better, join our team and donate to yourself and invite your friends/family to the cause! Our team is here: http://us.movember.com/mospace/index/search/?q=university%20colorado

The Movember Foundation is working tirelessly with an urgent goal in mind: accelerating breakthroughs in prostate cancer research that will benefit patients and their families. Movember is achieving this with the formation of the largest, global alliance of prostate cancer researchers and clinical specialists, who are tackling the toughest prostate cancer challenges. I had the privilege of hearing the updates on the research they have been sponsoring last week at the PCF retreat. More progress in the last 5 years than in the previous 25. Take a look there for updates/posts yourself!

I need your support to fund this important work. Together, we can create a world where no man dies of prostate cancer.

You can donate by:

– Donating online at http://mobro.co/michaelglode (and follow the pathetic growth of my not-so-manly moustache…)

You can learn more about the important work and impact Movember is having at: http://us.movember.com/programs. There’s a lot riding on this moustache, thank you for your support!