What is going to kill me? – the cloudy crystal ball

With an intense focus on prostate cancer, it is easy to overlook the reality of other causes of death or disability in making decisions about therapy. An example of this issue is the proliferation of molecular tests that have been validated to separate patients with “intermediate risk”, or “low risk” into “even lower” or “even higher” risk disease categories using a number of different gene expression profiles on the tumor or biopsy material. For example, Genomic Health offers the Oncotype Dx test that provides a “Genomic Prostate Score” that gives a patient who (based on clinical criteria such as PSA and number of biopsy cores positive) falls into a low or intermediate risk category another lab value (GPS) that can potentially be useful in making a decision about treatment. GenomeDx has a test that can evaluate high risk men after prostatectomy to more accurately predict metastatic disease at 5 years. There is a very balanced article on the challenges of using these tests (which are a potential step forward to be sure) in the real world of the clinic here.

However, in all of the excitement and marketing of these and other tests, a couple of key facts are often overlooked (and may be much more important in decision making). Prostate cancer is generally a slow disease anyway. Competing mortality looms large as patients get older. And most importantly, there are validated ways to put the “whole patient” into the picture before ordering these tests, whether they be a PSA, biopsy, or molecular analysis. The Charlson comorbidity index can be extremely useful in predicting survival and is barely ever mentioned in the molecular analysis literature/reports. It is a simple yes/no answer to whether a patient has any of these 12 conditions: diabetes, bleeding gastrointestinal ulcer, chronic lung disease, congestive heart failure, stroke, myocardial infarction, angina or chest pain, cirrhosis or liver disease, arthritis, inflammatory bowel disease, hypertension, and depression. In a lovely article published last year, the use of this analysis in relationship to prostate cancer mortality gave a vivid picture of prostate cancer mortality in the larger setting of 3533 men with prostate cancer. A snapshot of their data looks like this: 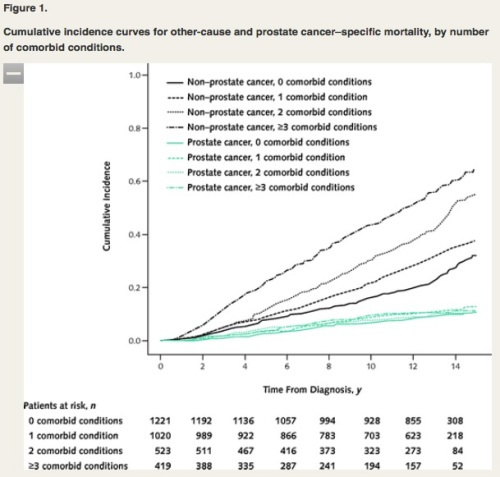 Very often, the comorbid conditions lead to death from another cause. In my opinion (and in my practice), we too often ignore our ability to quantify the risk of dying from “something else” when we focus so intensely on the PSA or other tests in counseling patients about what to do. It is also true that patient perception of test results can vary dramatically. One patient with a “GPS score” of 10 might be reassured, while another will perceive it as “not low enough” and opt for aggressive treatment rather than observation. To some extent this exposes the fallacy of “we need to separate the issue of treatment from that of diagnosis” thinking. Until the crystal ball becomes crystal clear, management of prostate cancer will remain challenging and requires the kind of wholistic thinking that is often better done by primary care physicians or public health professionals than by prostate cancer docs, or their patients.

I have been a bit concerned for some time regarding the hype surrounding “personalized medicine” as it relates to cancer. The concern arises from the excitement generated when a novel mutation can be targeted in a specific subgroup of cancer patients with astonishing results. The media goes wild. A good example of this is the BRAF mutation in melanoma. The V600E mutation found in 40-60% of patients with melanoma can be targeted with a drug (vemurafenib) that inhibits this activated cancer causing enzyme. The results can be astonishing, including apparently complete remissions in a disease that only 5 years ago was always fatal when metastatic. However, less well “advertised” is the fact that in most cases, the duration of such responses is quite short (median time to progression with BRAF inhibitors seems to be in the 6 month range). You can read a nice article on this story here. The personalized medicine aspect is that there is no reason to treat with the expensive drug if you don’t find the mutation. That’s the good news of personalized medicine. The bad news is that for cancer, heterogeneity is the achilles heel of this approach. If even one cell doesn’t have the target, it will survive…and/or cells that do have the target have enough genetic instability to get around the block in short order.

Now comes a fascinating study from the outstanding Hopkins investigators who looked at prostate cancer in a single patient who was diagnosed with prostate cancer at age 47. In the beginning he had a lymph node that was involved and he received surgery, androgen ablation, localized radiation and eventually chemotherapy and vaccine therapy. He succumbed to widespread metastases 17 years later at age 64. By doing deep genetic analysis of the primary tumor, the researchers were able to identify the source of the metastases. Surprisingly, the lethal metastatic disease originated in a small part of the primary tumor that was low grade, Gleason pattern 3, not the more aggressive, larger volume tumor elsewhere. While this is the first such study I am aware of in prostate cancer, similar studies in a few patients with renal cancer were reported last year.

So, for personalized medicine, the situation is either a cup half-full or half-empty. If you are an optimist, you hope that the majority of cancer cells in a patient can be targeted with a “driver mutation” like the BRAF mutation, and that when all of the susceptible cells have died off, the immune system might be stimulated to take over with a vaccine, or one of the exciting drugs that potentiate an immune response by knocking down the control arm of the immune system (PD-1 inhibitors, ipilumimab, etc.) and that the last cell will be eliminated before genetic instability gives the cancer the upper hand. If you are on the “half-empty” side, you contemplate that the human genome has evolved over millions of years to be remarkably adaptable to everything from volcano sulfuric gases to solar radiation, and that without such adaptability we might not be here at all. In this scenario, it seems unlikely that we will easily conquer the myriad of survival pathways that got us here by just attacking one of them. And…which one to attack may depend on which biopsy site you look at.

I haven’t decided which philosophic point of view I favor. The incredible progress made in treating HIV by attacking multiple pathways and converting HIV-AIDS to a chronic illness, much like diabetes, provides hope. So does the fact that the Hopkins patient lived 17 years thanks to the progress made in treating prostate cancer. As I often remind my patients, “if you die of a heart attack, we will count that as a cure of your prostate cancer”. May we all live in a healthy condition until our time comes!

Since I actually grew a scraggly mustache and some of you contributed, I am dedicating this post to Movemeber. They just released a video you can watch here. I think the positive message is terrific, although I personally do not believe we will “put prostate cancer out of business” as Jonathan says. My reality is that cancer is a disease of aging and will always be with us. Prostate cancer is no exception. If we age, we accumulate DNA damage, although some studies suggest it is more the cellular response to DNA damage than the DNA damage itself that does us in. Our telomeres shorten, and our ability to whack the bad cells in us slowly gets weaker. 100 years ago, very few men lived long enough to get prostate cancer. Now, most men in developed countries will probably live long enough to do so as you can see from this table.

So, our goal is to leave the unimportant prostate cancers alone, and keep men who have the more aggressive ones alive and in good health for as long as possible. We have lots of new and developing tools to help us with this, and for the most part, I think prostate cancer is already a “chronic illness”, even though some of us, sure enough, will die from it. Fortunately, even now, that is only about 3/100 men. So keep exercising, don’t smoke, eat the right things, and die of something else if at all possible, and as late as your genes will let you.

Not to put too many blogs up this week, but  a very well balanced article was just published and includes input from my friend Lori Klotz, whose articles have been at the forefront of doing active surveillance. He tried to get an international trial going that would provide some definitive evidence that this is a reasonable alternative. In the trial, men with low-volume Gleason 6 disease were asked if they would sign up to be randomized between immediate therapy versus going on an active surveillance program. We had the protocol open for about two years and could only find 1 or 2 men willing to participate. When you read THIS ARTICLE, you will see that the study was really important, since a significant portion of men go on to get treatment anyway, and that some studies suggest lower survival with this approach. On the other hand, those being watched do not suffer the side effects of definitive therapy. As with screening, there will be no “final answer”. However I really like this statement as an informational piece that I can give patients who are considering this approach. We also still offer targeted focal therapy at our institution as a possible “in between” treatment option – an interesting approach that is still very early in terms of knowing the long term consequences of this treatment. Mike Landess took this approach and has made a nice video blog of his experience. One of the major unanswered questions in all of this is what the optimal formula for followup should be. For example, PSA’s every 3 months, or should it be more often? Should you initiate treatment based on some absolute number, or a change in the doubling time? Should you biopsy every 2 years, or should it be 18 months? What about doing mapping biopsy on everyone who wants to consider active surveillance? So many questions and so little time !