To Watch or Not to Watch

Active surveillance (active monitoring, watch and wait, etc. – each with slightly different definitions) means you know you have a low risk prostate cancer (typically defined by a small amount of cancer in only a few of the biopsy cores and usually with a Gleason 3+3 score (some studies also include low volume Gleason 3+4 patients). Knowing this, you decide to not have treatment but just “keep an eye on things”. It all sounds so simple until you try to project what that means for YOU, and here is where the decision making becomes complex. Risk tolerance and rewards of decisions are psychological issues, not so much medical ones. Some people feel the thrill of jumping out of an airplane or off a bridge with a bungee cord more than compensates for the relatively small risk. Others don’t. For some men, ANY decrease in their sexual function or chance of incontinence is not worth the risks of treatment. For others, ANY risk of dying from prostate cancer is unthinkable. And, I would add – having counseled many couples – that the spouse’s feelings about sexual intimacy and survival vary considerably. For the record, the most common comment I hear from the wife is “We don’t care so much about sex, I just want George to be here” or similar, sometimes paired with the comment (regarding surgery vs. radiation) “I just want it out of him.”

With that background, Anthony D’Amico, one of the most prolific researchers and best analytic minds in our field, has written an editorial worth reading. In it he posits the question of whether the development of metastases, not death from prostate cancer, should be the better way of evaluating active surveillance. His primary analysis comes from looking at the ProtecT study, published last year in the NEJM. In that study, “82,429 men had a PSA test; 2664 received a diagnosis of localized prostate cancer (including 146 men from the feasibility study), and 1643 agreed to undergo randomization to active monitoring, radical prostatectomy, or radiotherapy.” There were about 550 men in each arm of the study and at the end of 10 years, there was no difference in the death rates from prostate cancer. 291/545 of the men in the surveillance arm had gone on to receive treatment within 10 years. However, as D’Amico points out, “the occurrence of metastasis, defined as the spread of PC to bone, viscera, or lymph nodes or a PSA level > 100 ng/mL, occurred in 62 men and was more than two-fold higher in men randomly assigned to [active surveillance] versus a treatment protocol.” In absolute terms, this meant that 32/545 surveillance vs 13/553 surgically treated vs 16/545 radiotherapy patients developed metastases and would need to suffer the side effects of hormonal treatment during their last decade or so of life. D’Amico argues that these men with metastases should be a better measure of the outcome for the active surveillance approach. What he does not deal with, however, is the benefit the men without metastases experienced by taking the approach. By 10 years, nearly half of the surveillance group had not had the side effects of definitive treatment, and even those who “fell off the wagon” and were treated enjoyed some additional time without side effects.

In a companion article to the ProtecT cancer outcomes article, we learn more about the side effects of treatment. These graphics from that article show that surgery (red line) and radiation therapy (gold line) produce significantly more side effects than the slower problems that develop over time with both urinary and sexual function in the surveillance (and all aging men) group (blue line). The PIVOT trial (also worth reading to gain perspective on the relative advantages of treatment or not) demonstrated that virtually all patients who receive treatment experience some decrement in sexual function. 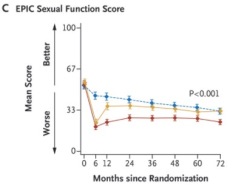 Not shown, but an important part of the overall picture, is that the surveillance protocols involve biopsies every 1-2 years, or MRI exams (or increasingly both), following the PSA values which can and does produce anxiety (see my blog on the “PSA Clock”), and the psychologic burden of “knowing you have cancer”. These side effects of surveillance are often under-appreciated, and some men who elect for surveillance eventually change their mind and opt for treatment because of them.

Finally, age makes a big difference in psychology. Older men are generally less sexually active and focused than younger. There is good evidence that it is just as safe to do active surveillance in younger men, if sexual function is an overriding consideration. In the end, the decisions about what to do if you have been diagnosed with a low grade prostate cancer are not easy, and highly personal – just like sky-diving and bungee jumping!

9 responses to “To Watch or Not to Watch”